More Bread than We Bargained For

“Did you know that the phrase ‘daily bread’ in the Lord’s Prayer really means ‘supersubstantial bread’? Like, supernatural?”

This is the sort of tidbit that gets dropped casually at my house from time to time. It’s what happens when you live with a seminary professor.

“Where did that come from?” I asked my spouse.

“I dunno. The interwebs.” Classic.

Turns out it’s true. How many times have I prayed the Lord’s Prayer – thousands? And I never heard this before?

Before doing any research, I managed to drop this linguistic firecracker in class. Doing so was, I admit, the pedagogical equivalent of irresponsible retweeting. Fortunately, this is a class of new faculty colleagues at Calvin College, participants in our January seminar designed to help orient them to the history and mission of the college. So now you’ve got a room full of scholars and an intriguing notion. Research will ensue.

And it did. I came back the next day with a brief verification, and then in subsequent days my two co- leaders for the seminar, Matt Walhout and Won Lee, brought more extensive research and reflections. It’s fair to say that our group has gotten a little obsessed with the Lord’s Prayer this month.

We’ve been missing something

So, what have we good pious folk been missing all our lives, pattering out this prayer while paying scant attention to the word “daily”? Well, get ready for some Greek and Latin, people!

The Lord’s Prayer appears in two gospels – Matthew (6:11) and Luke (11:3). In both places, the Greek word commonly translated to English as “daily” is “epiousios.” It’s a hapax legomenon and quite possibly a neologism. That is, it’s a word that appears absolutely nowhere else in any ancient Greek texts (except in the Didache, which is based on the gospels). It’s entirely possible that the writers of the gospels made the word up, trying to find a fitting way to record Jesus’ Aramaic teaching.

In the fourth century, when Jerome was working on the Latin Vulgate translation, he more or less cheated and translated the Greek term differently in each passage. In Luke, the phrase became “panem quotidianum.” In Matthew, it’s “panem supersubstantialem.” Why?

Both translations are plausible. Maybe Jerome couldn’t decide and ended up splitting the difference. I’ve always assumed that “Give us this day our daily bread” simply meant “supply us with our physical needs.” It turns out I was probably taught this explicitly at some point, because that’s exactly what the Heidelberg Catechism teaches:

“Q. What does the fourth petition mean?
“A. ‘Give us this day our daily bread’ means:
“Do take care of all our physical needs so that we come to know that you are the only source of everything good, and that neither our work and worry nor your gifts can do us any good without your blessing. And so help us to give up our trust in creatures and trust in you alone” (LD 50, Q&A 125).

My colleague Won, a Hebrew Bible scholar, deepened our class’s understanding of this quotidianum translation with a little survey of biblical context. The Matthew context is the Sermon on the Mount, which emphasizes trusting in God for today’s provision, not worrying – not striving and scrambling for selfish gain. The Luke context has similar themes. Jesus’ teaching here also resonates with the Israelite memory of manna, the bread in the wilderness, which the Israelites could not store ahead or hoard. They had to depend on God to supply it each day.

Proverbs 30:7–9, Won pointed out, adds another dimension to this. The teacher writes, “[G]ive me neither poverty nor riches; feed me with the food that I need, or I shall be full, and deny you, and say, ‘Who is the LORD?’ or I shall be poor, and steal, and profane the name of my God.”

Won reports that the Hebrew for “the food that I need” is “lehem hukki,” the bread assigned to me, the bread which is my portion. The Septuagint (Greek Old Testament) translates the Hebrew into a longer Greek phrase, “ta deonta kai ta autarke”: that which is needful and sufficient.

In this tradition, then, “daily” in the Lord’s Prayer essentially means not too little, not too much. It strikes me that this petition of the Lord’s Prayer is deeply countercultural, even deeply un-American. “Just enough” is not exactly an American motto. All these years – I have to say, against my conscious intentions – I guess I have been praying against overabundance, affluence, inequality and waste.

Meanwhile, back to the “panem supersubstantialem” stream. Jerome no doubt knew that there is a perfectly good Greek word for “daily” (“hemeran”), which the gospel writers chose not to use here. Instead, they made up (?) a word based on “ousia,” substance or essence. You could see how you can get to something like “essential stuff” from there, but “ousia” also a subtle and beautiful metaphysical word. If you have ever studied the Nicaean Christological quarrels over “homoousios” vs. “homoiousios” (there’s a difference – look closely), you know that “ousios” can refer to the essence of God. This is why we say in the Nicene Creed that the Son is of the same substance with the Father (the “homoousios” team won).

But really, why choose?

What might it mean, then, to pray, “Give us this day our supersubstantial bread”? Since the early fathers, not surprisingly, this phrase has taken on a eucharistic meaning. Even today, the Roman Catholic Catechism teaches that this petition goes beyond physical sustenance and asks for the “medicine of immortality,” the Eucharist – and on a daily basis, too.

I can see how this interpretation got abandoned for ordinary Protestants in the Reformation. After all, “supersubstantial” connects readily to the theology of transubstantiation, and the Reformers wanted to keep their distance from that in every way possible.

Now that I know about this tradition of interpretation, though, I would like to recover it for us children of the Reformation. I mean, why choose? The term “epiousios” is multivalent and spacious, wide enough to embrace both meanings, maybe made up precisely to do so. I can pray for just enough physical sustenance for the day and for spiritual sustenance at the same time. And isn’t it true that we must look to God each day to supply our spiritual needs as well? Maybe by praying for that spiritual sustenance, we might wonder what it looks like for us and how God supplies it, and thus widen our consciousness of God’s work in our lives.

The “why choose” approach seems appropriately sacramental, too, as in sacramental-with-a- small-s. It transcends the physical/ spiritual divide and honors all creation as meant to be transparent to God’s glory. Ordinary bread, in this way of thinking, is always already a sign of the eucharistic bread, which is always already a sign of Christ reconciling all things to himself.

As my colleague Matt Walhout suggested, praying for our “epiousios” bread places this petition more squarely in kingdom-anticipation mode, into a leaning and longing that characterizes the whole prayer. What if we thought of it as “Give us this day our kingdom bread”? That would point us toward a day of fulfillment when everyone has just the right amount and when the essence of God renews all things and transforms them into glory. 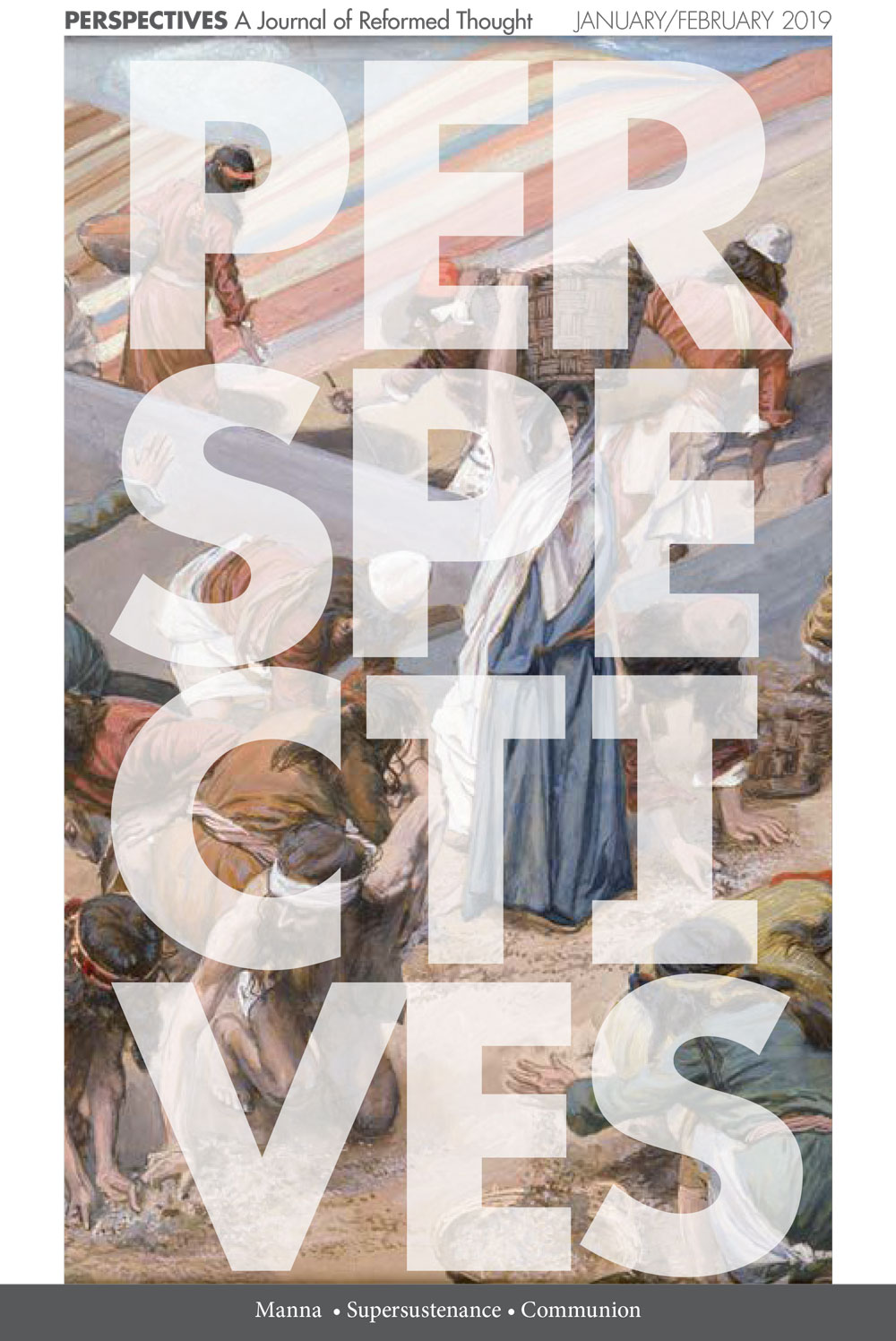 It’s a good thing there are places in the world for bookish people who would otherwise be fairly useless to society. I’ve found such a place as a professor of English at Calvin College, where I teach early British literature and creative writing. Born and bred in the Reformed tradition, I’ve been unable to resist writing several books about theological topics: beware the writer doing theology without a license. I’m married to Ron Rienstra, who does have a license, and we have three more-or-less grownup children. Besides books and theology and worship, I love classical music, science fiction, cheesy Arthurian romance, baking, and teaching myself useful skills like painting, gardening, and–-maybe someday-–drywall repair.