Why is Fear an Evangelical Habit of Mind?

This past weekend, a man entered a Pittsburgh synagogue and massacred 11 people gathered for worship. The assailant was armed with an AR-15 assault rifle, three Glock .357 handguns, and a heavy dose of anti-Semitic conspiracy theories. Minutes before entering the synagogue, he posted on social media that HIAS, a Jewish nonprofit helping to resettle refugees, “likes to bring invaders that kill our people.” He was likely triggered by theories bandied about by Republicans in recent days that the migrant caravan winding its way through Mexico was part of a Jewish plot. President Trump himself suggested (without evidence) that terrorists had infiltrated the caravan. The threat seemed real, and dire.

Earlier in the week, two African Americans were gunned down at a Kroger grocery store in Kentucky. The shooter, a white man, allegedly tried to enter a black church; unable to secure entrance, he instead targeted his victims at the nearby store. The incident was eerily reminiscent of the 2015 shooting at Charleston’s Emanuel African Methodist Episcopal Church, when nine African Americans attending a prayer service were shot dead by white supremacist Dylann Roof.

These are not isolated occurrences. The nation’s ten largest cities have seen a rise in racially-motivated crimes over the past four years; 2018 saw the highest level in a decade. African Americans are the most targeted group; in addition to anti-Black hate crimes, anti-Semitic, anti-gay, and anti-Latino attacks were most common. Anti-Semitic incidents are up 57% in the past year, the largest increase since 1979. Anti-immigrant sentiment is also on the upswing, and anti-Muslim hate crimes are also up significantly.

And yet, it seems that it’s white Christians who are most afraid.

In his book Believe Me: The Evangelical Road to Donald Trump, historian John Fea offers “A Short History of Evangelical Fear”–a history of evangelicals’ longstanding fear of outsiders, of unorthodoxy, and their racial fears–a history that has culminated in “a playbook that too often gravitates toward nativism, xenophobia, racism, intolerance, and an unbiblical view of American exceptionalism.” 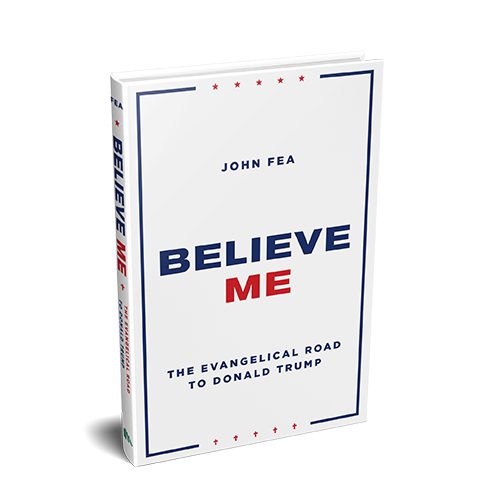 This tendency was exacerbated during the Obama administration, which, according to Fea, was “relentless in its advocacy of social policies that not only made traditional evangelicals cringe but also infused them with a sense of righteous anger.” Fea finds it “difficult to overestimate” the degree to which evangelicals felt “marginalized and even threatened.”

Much of what Fea writes on evangelical fear rings true to me, yet I am also uncomfortable with taking evangelical fear entirely at face value. It seems to me that an oversimplified emphasis on fear obscures other motivations. Here’s what I had to say in a review of Fea’s book:

Though Fea offers a sharp critique of evangelicals’ appetite for power, only rarely does he entertain the possibility that their pursuit of power may be intimately intertwined with their fears. For instance, though he acknowledges that white evangelical fear of newcomers might, in fact, reflect a fear of those who could challenge their own “power and privilege,” he quickly returns to a more sympathetic characterization of evangelical fear: “In a sin-cursed world, we should expect anxiety-induced emotions to rise in response to social change.” The problem, then, is not so much that evangelicals have misplaced fears, but rather that they “have not always managed their fears in a healthy way.”

To understand “the evangelical road to Donald Trump,” however, it pays to take a closer look at the nature of evangelical fear. Why have evangelicals feared some things (immigrants, civil rights, feminism), and not others (militarism, authoritarianism, guns)? Is fear simply a natural response to changing times, or is it actively stoked by individuals and groups with vested interests? Perhaps, upon closer inspection, fear and power end up being two sides of the same coin. Perhaps what white evangelicals have most feared is simply a loss of power.

In order to get to the bottom of this, it’s critical to look at who is stoking evangelical fear. It’s not just politicians. Conservative evangelicals have long traded in a “religion of fear” and a “politics of horror.” For decades, leaders like James Dobson, Jerry Falwell, Tim LaHaye, Bill Gothard, Francis Schaeffer, Mark Driscoll, Robert Jeffress, Franklin Graham, and Jerry Falwell, Jr., have been stirring up fear in the hearts of American Christians—fear that Christianity is under siege, that communists, or secular humanists, or feminists, or liberals, or Muslims are one step away from destroying the family, the church, the nation, God’s truth, even civilization itself.

Perhaps evangelical leaders believed these threats were real and present. Perhaps. But they knew full well that inciting fear in American Christians was key to amassing their own personal power. In convincing followers that evil lurked around every corner, they ensured that their followers would cling more tightly to the spiritual protection they promised—a protection that came with a cost.

Conservative evangelicals pride themselves on their “biblicism”—on upholding the authority of the Scriptures, and living their lives accordingly. Yet there are countless Bible passages about fear that have gotten surprisingly little air time in evangelical circles of late. “Peace I leave with you; my peace I give you….Do not let your hearts be troubled and do not be afraid” (John 14:27). “Have I not commanded you? Be strong and courageous. Do not be afraid; do not be discouraged, for the Lord your God will be with you wherever you go” (Joshua 1:9). “Even though I walk through the valley of the shadow of death, I will fear no evil, for you are with me” (Psalm 23:4).

Encouraging Christians to trust God and fear no evil, however, is not conducive to building religious empires or filling empty coffers. If Christians are placing their hope in Christ, there’s not much need for an earthly strongman. Sticking close to the Scriptures doesn’t make much business sense. Nor does it mesh well with the egos of celebrity preachers and power-hungry religious leaders.

Historically, the fortunes of the Christian Right—both in terms of power, and in a quite literal sense—have declined when Republicans are in office. It’s harder to gin up fear when you enjoy a place of privilege in the halls of power. By the end of the Reagan years, the Religious Right was in disarray. Thank goodness the Clintons came a long just in time to remind Christians that there were still enemies to fight. Money again poured in, often in small donations from Christians wanting to do their part to save their children, their country, their faith. With the election of George W. Bush, this pattern repeated itself. By the end of the second Bush presidency, there was talk of the death of the Christian Right, and the end of the culture wars. Then the Obamas arrived on the scene, putting an end to all such talk.

Now another Republican occupies the White House, and our president doesn’t seem to be taking any chances. It’s hard to tell if Trump knows his history, or if he’s motivated by a more base instinct. But he has done everything in his power to ratchet up a sense of fear, and to maintain a sense of constant peril. It was fear that elected him; it only makes sense that he would want to keep fanning those flames. Especially in the run-up to the midterm elections.

White evangelical fear is genuine. But history teaches us that evangelicals should be more suspicious about who is stoking that fear, and to what ends. And, if Marilynne Robinson is right—if “fear is not a Christian habit of mind”—we would all do well to consider why it seems to have become an evangelical habit of mind.